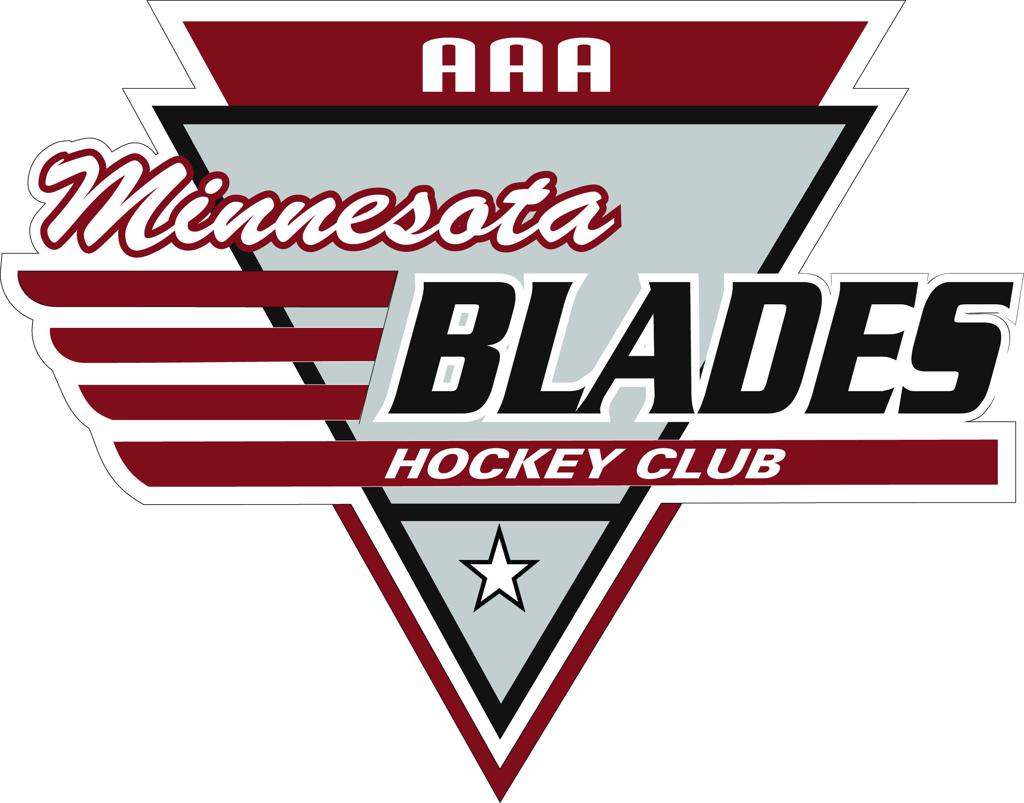 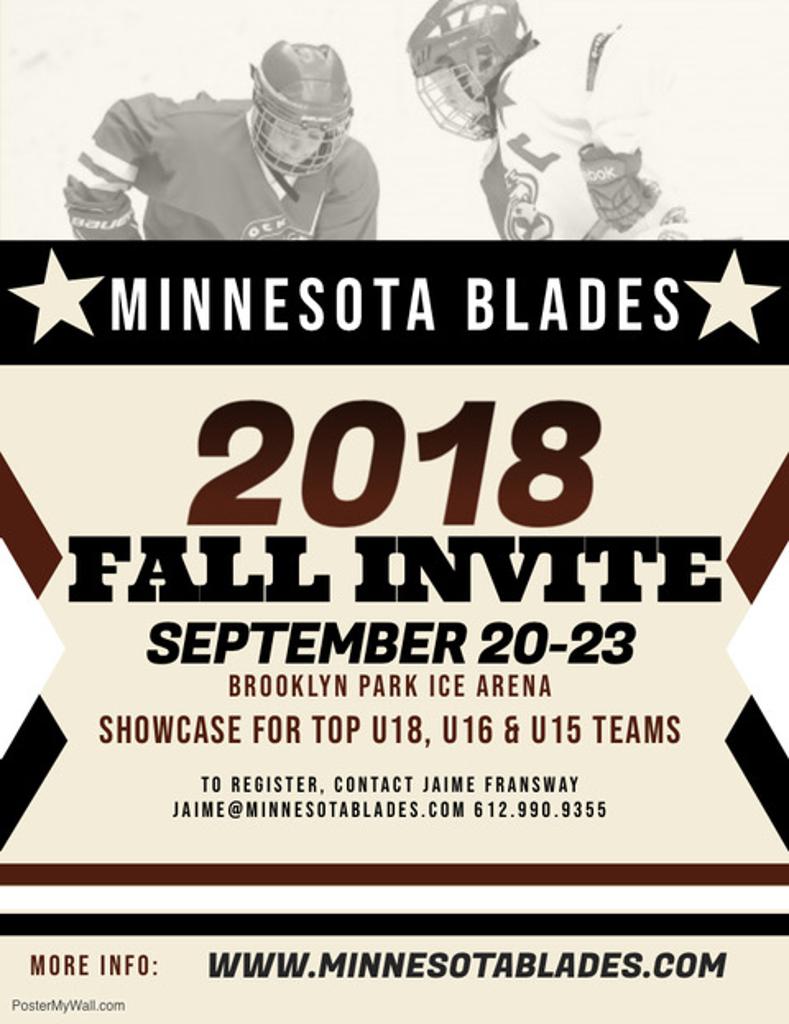 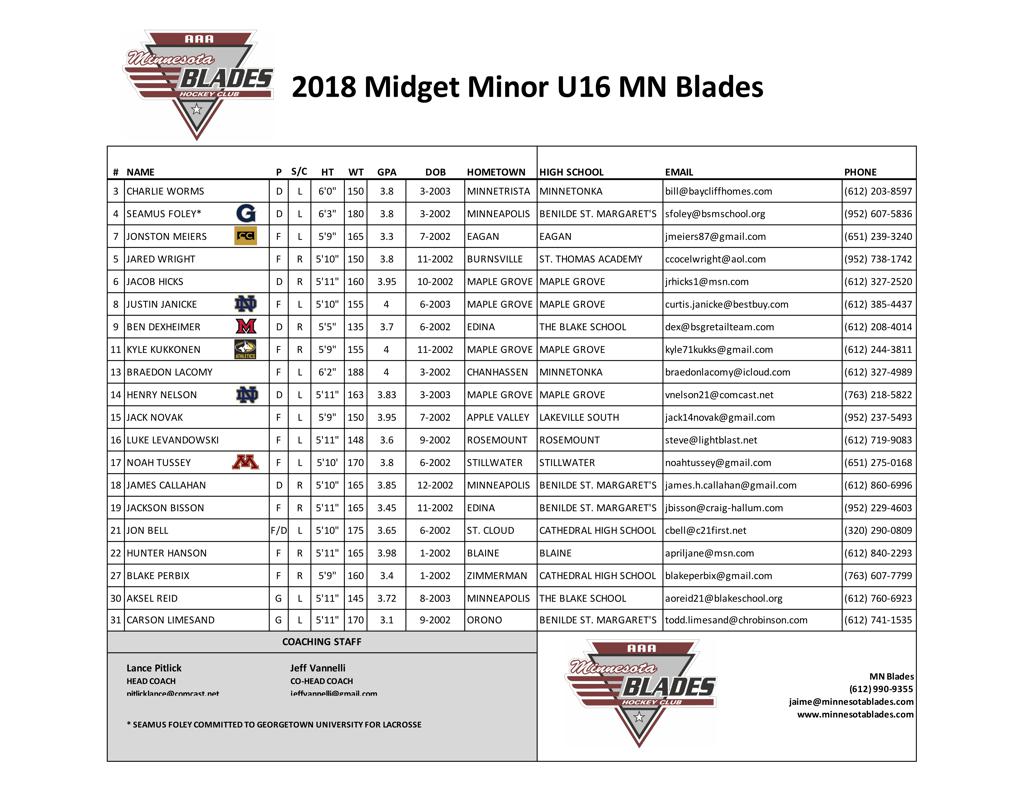 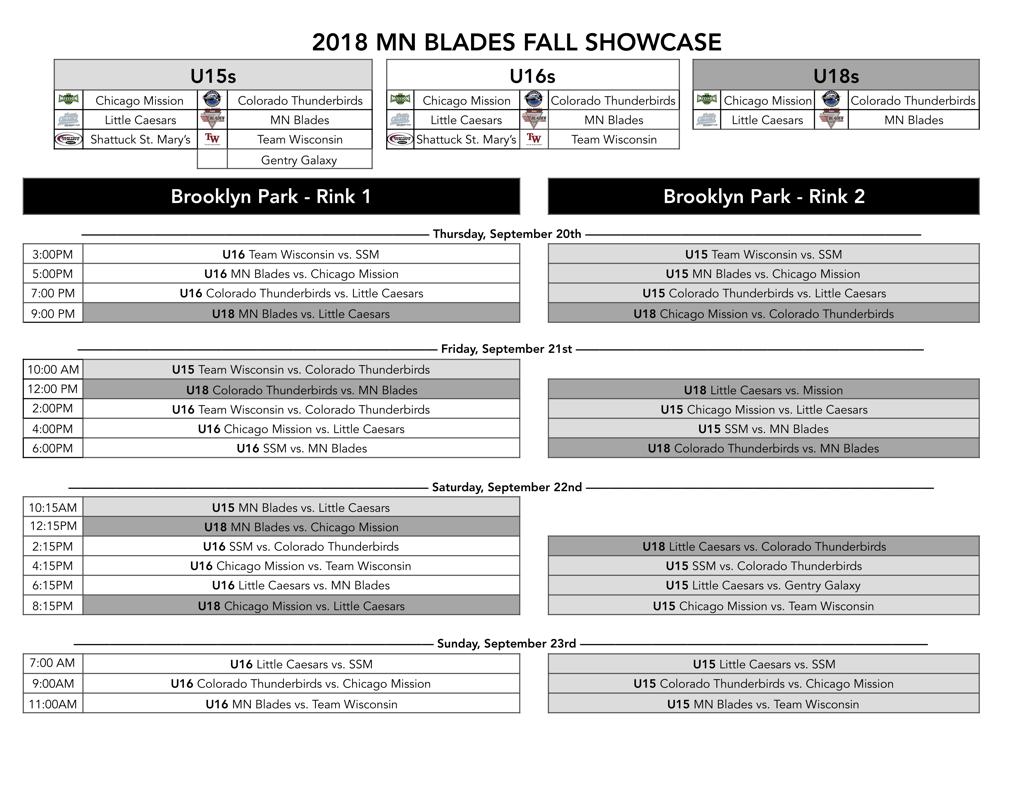 Omaha Lancers Showcase
October 26-28
The first game will be at 7:45am on October 26th and the championship game will be held at 1:45pm on October 28th
Hilton Garden Inn Omaha Aksarben Village
https://hiltongardeninn.hilton.com/en/gi/groups/personalized/O/OMAAVGI-LAN-20181026/index.jhtml?WT.mc_id=POG

The Minnesota Blades captured both the inaugural USHL Fall Classic 16U and 14U Tournament championships and will be looking to defend their titles against 15 of the top teams in each age group.

All games will take place at the UPMC Lemieux Sports Complex, training facility of the Pittsburgh Penguins, and Baierl Ice Complex in Cranberry Township, PA as well as the Robert Morris University Island Sports Center in Pittsburgh, PA from Sept. 27 through Oct. 1. Youth players will have complimentary access to all USHL games at the Fall Classic.

"We were very pleased with the overall performance of the youth events conducted last year as part of the USHL Fall Classic," said USHL President and Commissioner Bob Fallen. "Our objectives were to create events that delivered strong ROI to the participating teams, exposed players and parents to Tier 1 junior hockey and to establish our tournament invitations among the most coveted in North America. We achieved our objectives and look forward to building upon a strong foundation for USHL events."

USHL Central Scouting determined the top teams in the nation based on projected rosters and club pedigree from previous seasons. Once the 16 teams in each age group were selected, the department then determined seeding and group placement.

Each team will play all three opponents in its group, collecting points based on wins, overtime wins and overtime losses. The top teams in each group will then advance to the semifinals, while the other teams will compete in one last game for final standings. The championship will be determined with a final game, while final standings 3-16 will be determined by final points earned based upon records.

The Minnesota Blades captured both the inaugural USHL Fall Classic 16U and 14U Tournament championships and will be looking to defend their titles against 15 of the top teams in each age group.

"We are extremely excited to host what is arguably the best youth tournament in the country," said Doug Christiansen, USHL Director of Player Development and Recruitment. "It will give elite players, coaches and their families the opportunity to see the USHL firsthand while playing games against the best teams in the country in front of hundreds of scouts. To win this tournament, you will have be at your best for all five games. We can't wait to get started."

10 of the 16 teams at last season's USA Hockey National Championships, including all four semifinalists, will be participating in the 16U tournament. The programs also combined for over 65 total selections in the 2017 USHL Draft.

In total, 13 states will be represented between the teams participating in the 16U and 14U tournaments: Alaska, California, Colorado, Connecticut, Illinois, Massachusetts, Michigan, Minnesota, Missouri, New Jersey, New York, Pennsylvania, Texas and Wisconsin.

On Tuesday, Aug. 22, Jack Perbix received a message from the director of USA Hockey, saying that he was one of the 42 players selected to play in the 2017 CCM/USA Hockey All-American Prospects Game in Buffalo’s KeyBank Center – home of the Buffalo Sabers – on Sept. 21.

Jack Perbix will be the youngest player competing in the 2017 CCM/USA Hockey All-American Prospects Game. (Photo by Eric Oslund)

It’s the sixth year this event has been going on, and it was created to be a time for some of the best players in the United States, that are eligible for next year’s NHL draft, to showcase their talents on a national stage. In fact, in the past six years, there have been over 120 players that have competed in this game that went on to get drafted into the NHL.

But it’s not too often that a player who’s about to enter into just their junior year in high school is given the opportunity to play in this game, but that’s the case for Perbix. His Sept. 13 birth date is just two days before the cutoff, so not only is he technically eligible to be drafted in the next NHL draft – something he said would be “a dream come true” – but he will also be the youngest one on the ice during the prospects game.

Though, that’s nothing new to him.

“I’m used to it,” he said. “I’ve been playing against older guys the last couple years.”

Perbix first made his impact on the Elk River varsity team as a freshman, and turned into one of the team’s top scoring threats a year ago as a sophomore, showing that age really is just a number.

Jack Perbix celebrates after scoring a goal against Grand Rapids in the section tournament. (Photo by Eric Oslund)

Despite being younger than everyone on the ice, he plays with a physicality not matched by many, and he also has the speed to match. Two attributes that likely caught the eyes of those responsible for selecting players for this game, and now he’s looking forward to showcase those talents on a national stage.

“I have played with most of the players that are going out there at some point over the years, so I have a good sense from a playing standpoint of what it’s going to be like,” Perbix said of the prospects game. “A very high paced and skilled game.”

Once this game is done, and the snow starts to fall once again, many of the players in this game will go on to play in juniors, or some other setting – foregoing their final high school seasons. But not Perbix. After a lot of thought, he made the decision to spend his junior year playing for the Elks.

Six Minnesotans have made the roster for the U.S. Under-17 Select Team that will skate in the Five Nations Tournament in Ostrava, Czech Republic, August 23-27.

USA Hockey today revealed the full roster and coaching staff, which will be led by Head Coach Pat Ferschweiler from Rochester, Minn.